The ancient city of Patara: 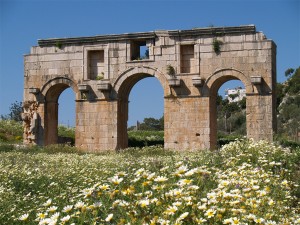 Possessing a natural harbour, Patara was said to have been founded by Patarus, a son of Apollo.[1] It was situated at a distance of 60 stadia to the southeast of the mouth of the river Xanthos.[2] Patara was noted in antiquity for its temple and oracle of Apollo, second only to that of Delphi.[citation needed] The god is often mentioned with the surname Patareus.[3] Herodotus[4] says that the oracle of Apollo was delivered by a priestess only during a certain period of the year; and from Servius[5] we learn that this period was the six winter months. It seems certain that Patara received Dorian settlers from Crete; and the worship of Apollo was certainly Dorian. Ancient writers mentioned Patara as one of the principal cities of Lycia.[6] It was Lycia’s primary seaport, and a leading city of the Lycian League, having 3 votes, the maximum.

The city, with the rest of Lycia, surrendered to Alexander the Great in 333 BC. During the Wars of the Diadochi, it was occupied in turn by Antigonus and Demetrius, before finally falling to the Ptolemies. Strabo informs us that Ptolemy Philadelphus of Egypt, who enlarged the city, gave it the name of Arsinoe (Arsinoë) after Arsinoe II of Egypt, his wife and sister, but it continued to be called by its ancient name, Patara. Antiochus III captured Patara in 196 BC. The Rhodians occupied the city, and as a Roman ally, the city with the rest of Lycia was granted its freedom in 167 BC. In 88 BC, the city suffered siege by Mithridates IV, king of Pontus and was captured by Brutus and Cassius, during their campaign against Mark Antony and Augustus. It was spared the massacres that were inflicted on nearby Xanthos. Patara was formally annexed by the Roman Empire in 43 AD and attached to Pamphylia.

The ancient city of Xanthos: 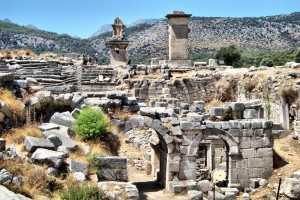 Xanthos (Lycian: Arñna, Greek: Ξάνθος, Latin: Xanthus, Turkish: Ksantos) was the name of a city in ancient Lycia, the site of present-day Kınık, Antalya Province, Turkey, and of the river on which the city is situated. The ruins of Xanthus are on the south slopes of a hill, the ancient acropolis, located on the northern outskirts of the modern city, on the left bank of the Xanthus, which flows beneath the hill. A single road, Xantos yolu, encircles the hill and runs through the ruins.

Xanthos is the Greek appellation of Arñna, a city originally speaking the Lycian language. The Hittite and Luwian name of the city is given in inscriptions as Arinna (not to be confused with the Arinna near Hattusa). Xanthos is a Greek name, acquired during its Hellenization. The Romans called the city Xanthus, as all the Greek -os suffixes were changed to -us in Latin. Xanthos was a center of culture and commerce for the Lycians, and later for the Persians, Greeks and Romans who in turn conquered the city and occupied the adjacent territory. After the fall of the Byzantine Empire in the 15th century, the region became Turkish. The ancient city had long since been abandoned.

As the center of ancient Lycia and the site of its most extensive antiquities, Xanthos has been a mecca for students of Anatolian civilization since the early 19th century. Many important artefacts were found at the city. Two tombs, the Nereid Monument and the Tomb of Payava, are now exhibited in the British Museum. The Harpy Tomb is still located in the ruins of the city. A sanctuary of Leto called the Letoon is located on the outskirts of the city to the southwest. The Xanthian Obelisk and the Letoon trilingual are two trilingual stelae which were found in the city and the Letoon. The site has been designated as a UNESCO World Heritage Site since 1988.